This op-ed by our president, Mitch Hagney, appeared in the Rivard Report.

On Thursday, City Council raised the number of backyard chickens that San Antonians can own without a permit from three to eight. Council approved amendments to the City’s Animal Care Services (ACS) code, including several to better define the rules for “domestic fowl” at residences, more than doubling the number of birds allowed. 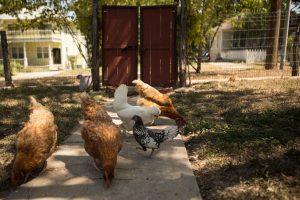 The Food Policy Council of San Antonio‘s vision is to create a vibrant local food economy, with healthy, sustainable, affordable food accessible to all. To that end, one of our goals is to protect and expand the right of everyone to grow their own food. As president of the non-profit, I have watched first hand as those who grow at least some of their own food, including eggs and poultry, develop long-term food security and gain foundational knowledge about agriculture for themselves and their community.

Chickens, ducks, or guinea hens can help reduce pests and provide fertilizer in a vegetable garden, or they can be raised on their own to provide protein-rich homegrown foods to families. While no official count exists, there are likely tens of thousands of backyard birds already being tended to throughout the city. Residents in many San Antonio neighborhoods have long traditions of keeping domestic fowl for eggs and meat, and others have been adopting the practice in recent years.

“There is no way ACS would have been so willing to change the limit if it wasn’t for all of the people who showed up at meetings, wrote letters, made phone calls, gathered signatures, left messages and comments,” Rocha told members after the Council vote. “A special thanks to all of the people who don’t even live in San Antonio, but cared enough to support the mission. This is one of those things where ‘it took a village.’ It was so much easier to walk into the Council people’s office when they have been bombarded by chicken supporters. There is a lot of love in our little chicken world.”

The Food Policy Council has sought some of these changes for a long time, combined with our earlier work to change zoning rules to allow for urban agriculture throughout the city. One of our work groups, and its leader Leslie Provence, is directly involved in proposing language changes to the City Code, and has been researching revisions to the livestock code for several years. There are still more restrictions to ease and rights to standardize, but for now if you are interested in raising chickens, here are the rules:

Donations are welcome and aid in furthering the organization’s mission.